Andriy Manchuk anti-Semitism antifascist Belarus Boris Yeltsin Bulgaria capitalism Colombia ColombiaResiste ColombiaSOS Color Revolutions communist Donbass DPR FARC-EP Ghost Battalion imperialism Ivan Duque Jesus Santrich Liva LPR Lugansk Lukashenko Maia Sandu Marxism Marxism-Leninism Mikhail Amerberg Mikhail Gorbachev Moldova Moscow Nadezhda Sablina NATO occupation OKP Pentagon Prizrak Putin RKRP Roma Russia September 23 Movement socialism Sofia Ukraine USSR
Join 6 other followers
Posted on September 1, 2015 by allpowertothesoviets
On Tuesday, September 1, activists and supporters of the “Red Bloc” (Our House – Moldova) organized a peaceful protest in Chisinau in front of the media holding company Moldexpo, affiliated with the oligarch Igor Plahotniuc, and home to the offices of TV networks Publika, Prime, Canal 2, Canal 3, et al.
People unhappy with the editorial policy of the oligarch-controlled TV channels, as well as daily lies and disinformation promoted by these channels, chanted: “Stop minciuna,” “Jos cenzura,” “Stop lying!”
“Today we have gathered at this impromptu, spontaneous, warning picket outside the offices of the four broadcasters of Plahotniuc’s media holding, who day after day pour dirt on our television screens, misinforming and manipulating public opinion. They are, in fact, a steel wall between the people and the oligarch Plahotniuc. We came here today to express our protest and express our emphatic ‘No!’ to disinformation and lies. We call on Plahotniuc’s TV channels — Prime and Publika, Canal 3 and the others, do not lie. Stop lying!” said Red Bloc leader Grigory Petrenko at the rally.
“The cowardly employees of the holding company barricaded themselves inside. They are so afraid of a small group of people that they summoned representatives of the police and the Argus security agency. What are you afraid of, you so-called journalists? What you are doing is not journalism, its prostitution. Today you are not running TV networks, but media brothels for oligarch Plahotniuc. Justice will still prevail. Plakhotnyuk will be jailed. Plakhotnyuk can run away, fly away or disappear with his capital, and all of you who are now working for him and get money from his pockets, you will stay here and still have to look into the eyes of the people you’re lying to every day. Stop lying!” said Petrenko.
According to him, “The garbage staged today by Prime, Publika TV and other media, this is the real crime against democracy, against freedom of speech, for freedom of speech is not when only one has freedom of speech, and everyone else can only listen. Freedom of speech means including a plurality of views.
“In recent weeks, we — the representatives of different political parties, non-governmental organizations, the opposition – have been represented as extremists, terrorists, separatists. That’s why we are here! We demand that you provide us airtime on these TV channels, because we are the representatives of civil society. We are not extremists, terrorists or separatists, we’re not going to stir up a war, we are not going to stir up a civil war, as they tell their viewers,” added the politician. 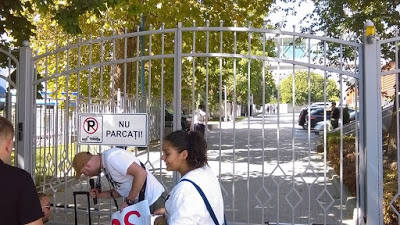 According to the protesters, the demands that “disturb” oligarch Plahotniuc are supported by the majority of the population. “We demand justice, we demand that extortionate rates for natural gas and electricity be cancelled. We demand that power structures be depoliticized, that leaders of the NPPM [National Centre for the Fight against Corruption], GPU and the Interior Ministry resign, because they are not independent figures but pawns of Plahotniuc. We demand that our country respect human rights and civil liberties, so people feel prospects for the future, can have at least the hope of a decent life. We demand the truth about what is happening today, we demand an end to the persecution of the opposition, we demand you stop lying, we demand justice,” said the former deputy.
According to the participants, this was a warning and promise more protests if reporters of Publika TV, Prime, Canal 2 and Canal 3 don’t stop the disinformation campaign.

Grigory Petrenko speaks at the picket: