Posted on June 1, 2015 by allpowertothesoviets

With sorrow and rage, people in the Donbass region have ripped aside the veil of U.S. diplomatic maneuvering to reveal what is truly happening there – ongoing war crimes against children and other civilians by forces loyal to the extreme-right-wing Ukrainian government backed by Washington.

In several mass outpourings in late May, residents of the primarily Russian-speaking region – formerly part of eastern Ukraine, now the independent people’s republics of Donetsk and Lugansk – honored their dead and demanded an end to Kiev’s constant violations of the Minsk-2 ceasefire signed by Ukraine, Russia, France and Germany in February.

On May 29, thousands of people attended the funeral of 11-year-old Katya Tuv and her father Yuriy in Gorlovka, Donetsk. The Tuv family home was destroyed during heavy shelling of the town by Ukrainian forces on the night of May 26. Katya’s mother Yekaterina lost her arm and her younger brother was also badly wounded.

“Once again, the Ukrainian side showed that it won’t carry out the peace agreement,” charged Donetsk leader Aleksandr Zakharchenko. “They prefer to violate it blatantly. [Ukrainian President Peter] Poroshenko’s signature on the Minsk-2 agreement was nothing but a deliberate deception, not only against us, but also against his country and the rest of the world.” (Novorossiya Today, May 29)

In Donetsk’s capital city, some 7,000 people protested on May 28 against the slaughter of the Tuvs. A mass requiem followed on June 1 for at least 69 children killed since the start of Ukraine’s “Anti-Terrorist Operation” against Donbass in April 2014.

Also on May 27, thousands of people braved pouring rain in Alchevsk, Lugansk, for the funeral of assassinated Commander Alexei Mozgovoi, four of his companions of the Ghost Brigade anti-fascist militia, and two civilians, all killed in an attack on May 23.

Since early May, the Donetsk and Lugansk militias have recorded dozens of daily violations of the ceasefire by the Ukrainian Armed Forces, fascist battalions and mercenaries – sometimes up to 50 in a single day. The number of causalities has been steadily increasing. (Dan-News.info, May 22)

Gorlovka is one of the hardest-hit cities. Again on June 1, a woman was reported killed and four people wounded in a shelling attack there. (Novorossiya Today) 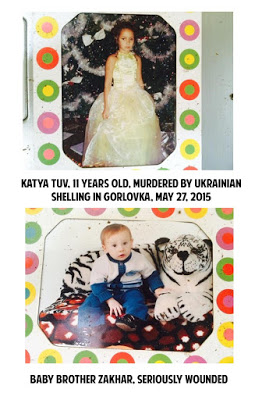 Behind the crisis: Washington and Wall Street

Increasingly, people in the Donbass are looking beyond the immediate threat posed by the coalition of oligarchs, neoliberal politicians and neo-Nazis that seized power in Kiev last year, and working to draw the world’s attention to the force behind it: U.S. imperialism.

Direct talks in Sochi between U.S. Secretary of State John Kerry and Russian Foreign Minister Sergei Lavrov on May 12 had led to speculation that some deal might be in the works to tamp down the war in Donbass. Six days later, U.S. Undersecretary of State Victoria Nuland, one of the architects of the February 2014 coup that brought the Kiev junta to power, visited Moscow for talks about Minsk II. (Sputnik News, May 18)

But the latest round of diplomatic maneuvers apparently did not achieve the concessions (i.e., total capitulation) that Washington was looking for, if indeed it was meant to achieve anything but window dressing.

Instead, President Barack Obama declared that “Russia occupies a more aggressive stance” on Ukraine during a meeting in mid-May with NATO Secretary General Jens Stoltenberg, TASS News Agency reported, signaling that the Democratic-Republican united front backing Ukraine’s war in Donbass continues unabated, and will continue trying to shift blame for the crisis onto Russia.

An even clearer signal was the approval of a $17 billion U.S.-IMF emergency bailout, part of a $40 billion package including loans and other credits, to stave off default by the collapsing Ukrainian economy. (InformFact.com, May 16)

The integration of neo-Nazi “volunteer battalions” into the Ukrainian military structure also continues, as does the U.S. Army training of Kiev’s fascist National Guard.

Taking his cue from Washington, Ukrainian President Poroshenko denounced the leaders of Donetsk and Lugansk, saying he would never negotiate with “homeless people, atheists and parasites who were given weapons, unable to feed themselves, [with an] irresponsible attitude towards children and the elderly.” (Gazeta.ru, May 29)

He conveniently left out the fact that Ukraine and its Western allies have imposed an economic blockade of the Donbass, and that he is responsible for the bombing of children and cutoff of pensions to seniors.

The surprise appointment of fugitive ex-President of Georgia and noted U.S. puppet Mikhail Saakashvili as governor of Ukraine’s embattled Odessa region on May 29, and the concentration of junta military forces there, may signal increased repression not only for the multinational port city, but also for neighboring Moldova. (Timer-Odessa.net)

Moldova’s oligarchic government is closely allied with Kiev and faced with its own breakaway republic, Transnistria.

Anti-fascist militia from U.S.: ‘Now is the time to stand up’

Citing intelligence reports, Donetsk Defense Ministry Spokesperson Eduard Basurin warned that a team of U.S. chemical weapons specialists are traveling to Ukrainian occupied Mariupol, where they may assist the junta’s forces in carrying out a provocation in order to charge the people’s republics with “crimes against humanity.” (News-Front.info, May 29)

How will the anti-war and other people’s movements in the U.S. respond to Washington’s role in these war crimes?

In a powerful video appeal, Russell Bonner Bentley, an anti-fascist Donbass militia volunteer known as “Texas,” took viewers on a tour of the bombed-out remains of the Tuv family home in Gorlovka.

Speaking directly to U.S. workers and activists, Bonner Bentley said, “This is what the United States is doing in Ukraine. All the people that have been killed, all the homes like this that have been destroyed, are only because this war was started by the U.S. government. …

“This is your responsibility. Americans are like the ‘good Germans’ who supported Hitler and said we don’t care what the Nazis do in other countries as long as we have our jobs, watch sports and drink beer. …