Posted on May 26, 2015 by allpowertothesoviets
International Action Center (USA)
Statement on the death of Commander Alexei Mozgovoi
May 27, 2015

To the family, friends and loved ones of Commander Alexei Mozgovoi;
To our sisters and brothers of the Ghost Brigade and the Armed Forces of Novorossiya;
To the people of Alchevsk, the Lugansk People’s Republic, and Novorossiya:

Today, we join with millions of anti-fascists and anti-imperialists worldwide who mourn the death of our comrade-in-struggle, Commander Alexei Mozgovoi, and four other Ghost Brigade members assassinated on May 23, 2015: Anna Aseeva-Samelyuk, Alexei Kalascin, Andrej Rjajskih and Alexander Yuriev.

We raise our voices with you to demand that their killers be found and punished. And we demand the punishment of the fascist junta in Kiev and its backers from Washington to Berlin, whose hands are covered in the blood of innocent children, women and men of the Donbass. 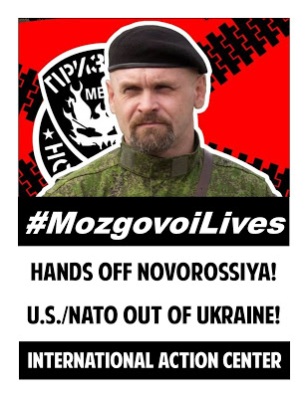 Commander Mozgovoi displayed many of the outstanding qualities of historic revolutionary figures like Che Guevara and Thomas Sankara – a deep understanding of the peoples’ aspirations, inexhaustible integrity, modesty, uncompromising principles, and the ability to rally people to his cause. And like them, he will continue to inspire people fighting for liberation around the world for many years to come.

Mozgovoi was a fierce proponent of broad anti-fascist unity. But he insisted that this unity must be based on principles, not opportunism or rotten compromise for the sake of expediency.

He was not afraid to criticize diplomatic arrangements that he believed gave damaging concessions to the Kiev junta and NATO imperialism. He spoke out against the encroachment of oligarchs who want to remake Donbass in their own image, not as true people’s republics. He called upon the workers and soldiers of Ukraine to turn the guns around and join Donbass in a united revolt against oligarchy and war. He challenged injustice wherever and whenever he saw it.

He was an internationalist who understood that solidarity of peoples is essential to victory.

The principles, courage and selflessness of Commander Mozgovoi and the Ghost Brigade should prod the conscience of every honest anti-fascist and anti-imperialist to ask – how can we do more to remove the boot heel of US and EU imperialism from the neck of the Novorossiyan people?

“You can kill a revolutionary, but you can’t kill the revolution,” said the Black Panther martyr Fred Hampton. We welcome the determination of the Ghost Brigade’s leaders and fighters to carry on fighting for the revolutionary ideas of Commander Mozgovoi. And we pledge to stand and fight beside you. 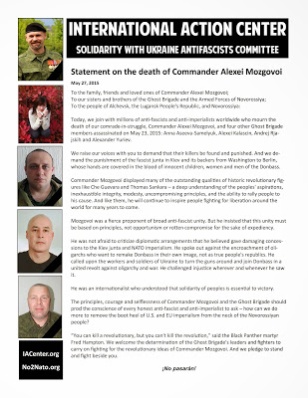