Posted on May 11, 2020 by allpowertothesoviets

May 11: Immediately after the lockdown eased, many returned to work and immediately there were numerous accidents, some even fatal. The facts have had significant media coverage, but despite the dominant narrative, this is not something unexpected, but perfectly predictable numbers. 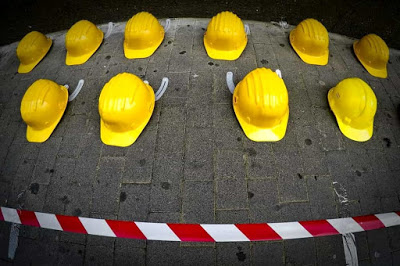 Accidents at work are a national tragedy that no government has ever wanted to take seriously. In truth, on almost the whole planet the situation is no different.

First of all, it should be noted that deaths at work also occurred during the lockdown, certainly fewer, but there were.

Then you need to understand how many deaths at work there are “normally” in Italy. Since the country is more or less returning to normal, it is worth knowing how many deaths to expect each day.

The toxic narrative touted by institutions and the mainstream media tell us about 2 deaths per day (around 700 per year). This is absolutely untrue. That is only the count made by National Institute for Insurance against Accidents at Work (INAIL), which does not include agricultural workers and government employees. If you add these categories, you get 1,000-1,500 people a year.

However, even the above three categories would also be a partial count, for a number of reasons. The most obvious is that it does not include undeclared deaths at work, something terrible that mainly involves immigrants.

We must also know that more or less all over the world there is the bad habit of underestimating accident statistics (fatal or otherwise). This is done in order to be able to show constant albeit non-existent progress in safety at work.

This is a small bureaucratic trick: every year a partial number of accidents is declared and compared with the previous year, which refers to a “less partial” number of accidents. This is possible because many accidents at work take time to be proven as such (sometimes a legal case has to be made).

This is obviously false, but politicians and managers generally do not scruple to resort to this system to boast of progress. Those who should supervise security (both institutions and managers in various private companies) often have no interest in actually reducing accidents, just reducing them artificially with this trick. An accounting trick that allows politicians to make political speculation and managers to earn target rewards and whatnot.

Newspapers often report deaths and accidents at work to arouse popular emotion. Sometimes they do it to distract the masses; in extreme cases, the narrative can pursue commercial purposes such as hitting the competition or seeking state funds.

Whatever the reason, when newspapers pay attention to the world of work (as is happening at the moment), they report a more or less truthful number: about 4 deaths a day, in Italy alone.

There is a silent massacre. Workers continue to die, become disabled, get sick and injure themselves. Safety should not be considered as a benefit or a cost, but rather raised to a basic principle for work.

Without security, it is not possible to work and, since the bosses don’t care about it, drastic measures have to be taken. These can be the most varied, certainly a tightening in the legislation on the liability of directors (and / or owners) and above all the expropriation of the company. Then things would change.

One thought on “Italy: We go back to work and we die”