Posted on December 13, 2019 by allpowertothesoviets

Dear friend,
We are proud to announce that December 9, 2019, marks the one year anniversary of our publication Struggle for Socialism ★ La Lucha por el Socialismo!

Please keep our voice strong with your donation. Donate now.

This has been an incredibly important year for exposing the imperialist lie machine on almost every front, from Venezuela — where U.S. imperialism demonized President Nicolás Maduro to justify an unsuccessful coup attempt — to the continuing Hong Kong demonstrations — where empire has obscured the real issues under the false cry of “democracy” — or the continuing U.S.blockade of Cuba. 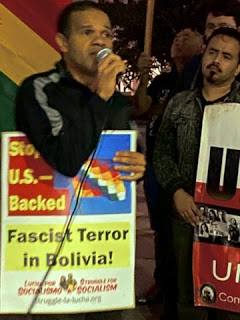 Our publication immediately condemned the coup in Bolivia and issued a statement in defense of the rightful president, Evo Morales. We did more than just write about Bolivia. Our writers helped to organize protests overnight from New York City to Los Angeles to Baltimore and Washington, and in other cities.
In addition to our continuous coverage of anti-imperialist struggles from Syria to Zimbabwe, from the Philippines to Ukraine and Palestine, Struggle ★ La Lucha held several national webinars, including “Sanctions are War” and “The Puerto Rican Liberation Movement.”

We took to the streets during the global climate strike, distributing our publication with front page coverage of the Amazon fires and carrying a huge banner that read, “The Pentagon, world’s biggest polluter — Shut it down!”
We have covered the attacks on immigrants and the movement to defend them; we have analyzed the rising racist, rightwing violence and its connection to capitalism in the United States, discussed the capitalist economic crisis and covered the workers’ fightback. This included publishing a series of articles from an Amazon worker.

The fight for all political prisoners, from Mumia Abu-Jamal to Leonard Peltier, has received continuous coverage in both our printed editions and on the web. We have published a series of articles entitled “Black August — 1619 to 2019” by writers Gloria Verdieu and M. Matsemela Ali Odom, soon to be published as a book.
Our writers attended and covered the “National Day of Mourning” in Plymouth, Mass., in depth.
Struggle for Socialism ★ La Lucha por el Socialismo representatives attended and reported back from the anti-imperialist conference in Havana, Cuba, and from the Women’s Conference in Namibia called by the Women’s International Democratic Federation/Federación Democrática Internacional de Mujeres.

In just one year, we are proud to announce not only our participation at the major marches commemorating the Stonewall Rebellion for LGBTQ2S pride but also the publishing of a new book by Bob McCubbin, “The Social Evolution of Humanity; Marx and Engels Were Right.” You can order the book here.
These are some (not all) of our accomplishments in just one year!
We believe that there is a tremendous need for our publication Struggle ★ La Lucha! It is crucial that we not only survive but expand. This means being able to come out with a printed version more frequently; the ability to have a greater internet presence and to be able to send our activist writers into the field to give first hand reports.
We can only do this with your help.
Please consider donating to help us grow: DONATE
We’ll see you in the streets!