2017 is here — the 100th anniversary of the Great October Socialist Revolution.

In February 1917, under the blows of almost all sectors of society, Tsarism fell. The history of the Russian monarchy, which had become an obstacle to further economic and social progress, came to an end. The centuries-old dream of Russia’s best minds for the elimination of autocracy as a “primitive state of human nature” (A.N. Radishchev) came true. Peasants, workers, soldiers, and the oppressed peoples of the empire breathed freer. However, those who took power — a block of large landowners, capitalists and moderate parties — could not solve, and did not want to solve, the centuries of accumulated social contradictions, nor could they give convincing answers to the fundamental questions facing contemporary Russian — about the world, about peace, about real democracy, elimination of church dictates in education, abolition of class and national privileges, restrictions on workers’ control over production, reduction of the working day, refusal to pay the debts accumulated by the Tsarist government to its Western “allies.” Therefore, further development of the revolution was inevitable and necessary.

The uprising of the workers and soldiers in October 1917 ousted the worthless Provisional Government. Responsibility for the situation in the country was borne by the authorities that came from the people themselves — the Soviets. The leading role was played at that time by the only party fully reflecting the aspirations of the broad masses of the working people — the Bolshevik Party, led by Vladimir Ilyich Lenin. 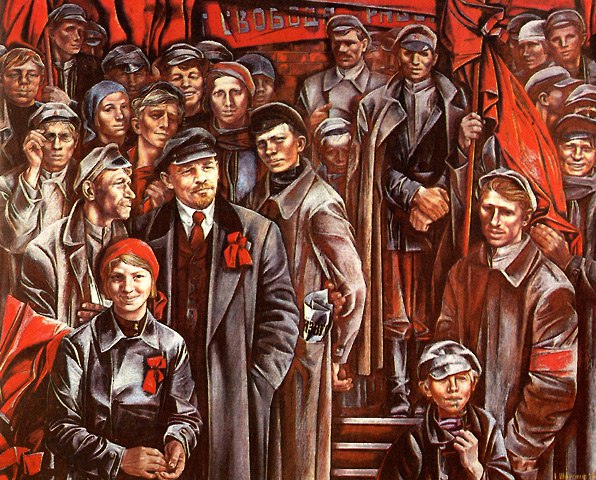 As a result of the victory of the socialist revolution, the age-old backwardness inherited from Tsarist Russia was overcome in the shortest possible time. For the first time in history, the exploitation of man by man was eliminated, and the right to work, rest, education, healthcare and social protection was realized. The Soviet government began the construction of a just society, which for centuries working people and the great minds of humanity had only dreamed of. The October Revolution not only saved historical Russia from disintegration, but also showed an example of rallying the unity of the working people of different nationalities in a new type of state — the Union of Soviet Socialist Republics. By ensuring all nations the unique conditions for peaceful coexistence, the Soviet Union was able to commit to industrialization, a radical transformation of agriculture, and a large-scale and comprehensive cultural revolution. The advantages of the socialist system included: public ownership, planned development, the opportunity to focus on key areas of society, collectivism, proletarian internationalism. These played a decisive role in the fact that the Soviet Union broke the spine of fascism in the Great Patriotic War and the Second World War, and in a short time restored the economy, began the world’s first space exploration, defended world peace, and came to the forefront of scientific, technological, social and cultural development.

The Great October Socialist Revolution, being a proud feat of our people, became, at the same time, an historical contribution to the progress of all human civilization. It started an upsurge of the world revolutionary movement, and the formation of Communist Parties in the colonies and dependent countries increased the national liberation struggle, which led to the abolition of the colonial system of imperialism. The process begun by October reached its peak after the Second World War, when under the influence of the Soviet Union, revolutionary victories took place in Europe, Asia and the Americas, and a world socialist system began to develop.

The experience of the Great October Revolution and the socialist revolutions in other countries, the practice of socialist construction, and the temporary defeat of socialism provide an opportunity to talk about important things that must be understood.

Were conditions ripe for socialism in the world and, in particular, in backward Russia, a hundred years ago? Yes, they were ripe. When capitalism entered the stage of imperialism, the necessary material preparation for socialism was completed. The unevenness of capitalist development, in conditions of acute class contradictions, creates the preconditions for breaking the chain of imperialism — not necessarily in the most developed countries, but in the country where the social contradictions are most acute at the time, and where there is development of not only a workers’ but also a broad democratic movement. A hundred years ago that country was Russia, and the socialist revolution was a natural phenomenon. It confirmed in practice the possibility of the victory of socialism in one country. If the Parisian working class in the 19th century made the proletarian revolution and held the Paris Commune for 72 days, the Soviet government lasted for more than seven decades. This proves that despite all shortcomings, weaknesses and mistakes made on this difficult path, in the USSR socialism advanced beyond scientific prediction and dreams and became a reality.

The presence of the objective prerequisites of socialism by itself does not automatically lead to the victory of the workers. The victory of the revolution and construction of socialism is impossible without the subjective factor — the leadership of the Communist Party, armed with advanced scientific theory. The party grows and is strengthened when it is not afraid of criticism and self-criticism, if it does not gloss over the mistakes and shortcomings of its work, if it teaches and educates its members about errors in party work, if it can correct its mistakes in time. Scientific and class-based principles governing the policies of the Communist Party are a prerequisite of socialist construction. Conversely, the loss of these principles leads to the growth of opportunism in the party, which becomes a counter-revolutionary force. That is what happened to the Communist Party of the Soviet Union by the end of the 20th century.

The Great October Revolution raised the question of the role of personality in history in a new way. The revolution was carried out not only by objective factors and the heroic struggle of the masses, but also because of the theoretical and organizational genius of Lenin. And the successful construction of socialism was possible in the USSR not in the least because there was a cohort of revolutionaries, outstanding statesmen and party leaders, headed by J.V. Stalin, who acquired the necessary knowledge, passed through the school of revolutionary struggle, and participated in the victory of the party. Alas, the party subsequently practiced the nomination of “technocrats,” not burdened with scientific knowledge and communist convictions. This process resulted in a large concentration of careerists and miscreants in the political leadership of the USSR, and Marxists were in the minority in the CPSU.

The victory of the revolution would have been a hopeless case if the Bolshevik Party was not based in the Soviets, trade unions, factory organizations, and workers’ militias. The soviets were the apparatus of power by which millions of workers were involved in the practical struggle for socialism. Their sacrifice, enthusiasm, and unparalleled heroism helped our country rise from devastation and backwardness to the heights of economic and social development. Over time, the increasing political consciousness, cultural and professional level of the workers demanded the revival of the soviet system, thoughtful reforms for the democratization of public life, and the expansion of self-rule. Alas, the political system of socialism remained without significant changes until the end of the 1980s. The passivity of the masses was growing. This led to disorientation during perestroika, as Soviet workers were unable to work out a correct evaluation of what was happening and defend the socialist system.

The most important lesson of October is that by embarking on the path of radical changes in social reality, the people must be able to defend their choice, sometimes very firmly, with arms in their hands, against the encroachments of internal enemies and their foreign backers. “No revolution is worth anything unless it can defend itself …” – this case has proven the truth of Lenin’s words. Therefore, preserving the dictatorship of the proletariat until the establishment of full communism is imperative. Rejection of the proletarian dictatorship, its weakening, leads to the erosion of the socialist system and its subsequent liquidation.

In the late 1980s-early 1990s, in our country and in Eastern Europe, socialism suffered a temporary defeat. As it turned out, despite all the successes and achievements, serious crisis affecting the economy and all aspects of social life could ripen in Soviet society. A real opportunity to move to a new stage of socialism was missed, which could effectively combine social property, social justice and political democracy. As long as the productive forces are not fully and finally developed away from capitalist relations of production, the danger of restoration of capitalism persists. Socialism must always and in all areas prove its superiority over capitalism until the disappearance of the latter, and the inhibition of socialist development leads to a revival of the preconditions for the return of capitalism which persist in socialist society. This is the main lesson of Soviet history.

This lesson is sure to be learned. We believe that the triumph of the counter-revolution will not last forever. There are no and can be no forces that can turn back the wheel of history. The social and economic setbacks, destruction of businesses, unemployment and poverty, division of society into masters and servants, concentration of wealth in the hands of the oligarchic elite, will be overcome. We have reason for optimism. On our side is the objective course of history, the advanced science of society — Marxism, confidence in the ability of the masses to become creators of deep social transformation. Another world is possible! Mistaken or lying are those who declare capitalism the “end of history”, the final “station” of human development, after which only unimportant changes will take place.

100 years ago, the victory of the Great October Socialist Revolution marked the beginning of humanity’s path “from the kingdom of necessity to the kingdom of freedom.” As V.I. Lenin rightly pointed out: “We have made the start. When, at what date and time, and the proletarians of which nation will complete this process is not important. The important thing is that the ice has been broken; the road is open, the way has been shown.”

Thus, the 21st century will bring us new revolutionary battles and victories.

Forward to the upcoming anniversary of the Great Revolution!

A new October lies ahead!

One thought on “A new October lies ahead!”